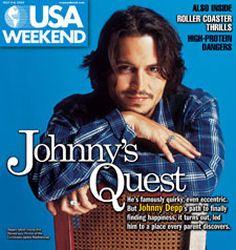 We trekked to France tracking down the always offbeat Johnny Depp to see if family life has settled him down—or if he’s still living on the edge.

Imagine a doting dad playing Barbies on the floor with his 4-year-old daughter while he gives his baby boy a bottle early on a Sunday morning. Now move the scene to a farmhouse in the south of France, picture the father as a somewhat disheveled but darkly handsome long-haired man with mysterious gold caps on his teeth, and you have a glimpse into the life of daddy Johnny Depp.

But the former teen heartthrob—remember 21 Jump Street?—isn’t quite your average father. At 40, Depp loves to play loud electric guitar, wears clothes that could use a cleaning, occasionally orders $18,000 bottles of wine in restaurants, and pals around with Rolling Stones bad boys Keith Richards and Ron Wood.

Still, cultivating his domestic side is something of a change for the actor and star of the Disney epic Pirates of the Caribbean: The Curse of the Black Pearl, which opens Wednesday. These days, Depp’s focus is squarely on girlfriend Vanessa Paradis, 30, a beautiful French actress and pop singer, and their two children, Lily-Rose and Jack. He says he wants to marry Paradis when their kids are old enough to enjoy it, preferably at a three-day “gypsy wedding.” Making it legal would only seem fitting to a father so smitten with his children that he writes off the years before their birth—when he was dating actress Winona Ryder and model Kate Moss and starring in a string of strong, offbeat movie roles—as a total waste of time.

“I literally feel as though I didn’t have a life before,” says Depp, sitting in an elegant bar in Paris wearing a rumpled dark suit and smoking a homemade cigarette that would get him tossed out of most establishments in the United States. “It was like existing, but not living. When you have a baby, it’s like a veil is lifted suddenly. [Before,] I did stuff and I smiled and I laughed, but it’s like I didn’t experience it until I had kids. You can’t imagine the degree of joy and love and life that’s available until you have a kid. I just didn’t get it.”

Depp seems to have outrun his demons. The early line on his career held that he was bound for self-destruction. He was expected to date one too many supermodels, develop a drinking or drug problem, destroy too many hotel rooms, attack too many paparazzi, alienate one too many producers and end up as a better-looking version of Mickey Rourke, unable to find meaningful work.

Instead he fell in love, first with Paradis and then with his adopted country. He says he is shocked by the gun violence in American schools and feels it is far safer raising a family in France.

“I was very lucky that something steered me to France back in ’98,” he says of his decision to make a movie with Oscar-winning director Roman Polanski in 1998. “I love America—I love going back, seeing my family and friends—but it’s wonderful to get back to France and be living in a tiny village with nothing around. There is still the possibility to live a simple life. You can go to the market, walk about, buy fruits and vegetables—the things they did 100 and 200 years ago. We have moments when we’re sitting in our house and our kids are playing, and we look at one another and think, ‘Thank God we escaped.’”

Depp comes from a poor rural family (he alternately refers to them as “hillbillies” and “white trash”), which makes his rise to international stardom even more unlikely. He moved from Kentucky to Florida when he was 5; once in Florida, his family moved “at least” 30 times in 10 years, for no particular reason, he says, except to satisfy his mom’s wanderlust. (Depp was raised primarily by his mother after his parents divorced when he was 15.) “To this day,” he says, “when I pack a bag, it triggers some kind of trauma.”

A product of the rural South who spent many years in Hollywood, Depp never really felt at home until he moved to France. He rejects the view that there has been a surge of anti-Americanism there because of opposition to the U.S.-led war in Iraq, and he believes the French people have behaved in a dignified manner while some Americans have resorted to “schoolyard tactics” by renaming French fries “freedom fries.”

“That was so revealing, that grown men sat around and came up with that idea,” he says of the freedom fries initiative. “It was tragic and embarrassing. At the same time, I was happy it was exposed, and people knew that a bunch of congressmen—big people, the upper-drawer people—made that decision.”

He also was not convinced by the Bush administration’s rationale for the war. He says the real reason was America’s economic interests. “I saw these American kids being shipped off to war, and I was looking at their faces and thinking, ‘They’re not ready for it,’ ” he says. “Is anybody ever ready for it? You’re thinking about where they’re going, what they’re getting into. What’s it really all about? It’s about dough; it’s about money. That’s ugly.”

Depp used to scorn the Hollywood star-making machine and rail about the corrupt nature of the film business. But that harsh talk and superior attitude has faded. He realizes the absurdity of criticizing an industry that lets him live as he pleases in a French farmhouse near swanky St. Tropez and choose which roles he wants to play. Pirates of the Caribbean is the first in a sudden run of movies for Depp, including the modern-day Western Once Upon a Time in Mexico with Antonio Banderas, out in September, and the drama J.M. Barrie’s Neverland with Kate Winslet, to be released next spring.

“It’s a terrific job, and I’m very thankful to still get gigs,” he says, still sporting the gold dental work on display for his role as Capt. Jack Sparrow in Pirates. “There were a number of years when I took offense to Hollywood, when I took it all so seriously. But it doesn’t bother me too much anymore. I understand it now pretty much, and I don’t play it. If I play, I want to play on my terms.”

That means having Hollywood come to him, not the other way around. When heavyweight producer Jerry Bruckheimer wanted Depp to star in Pirates, he made a special trip to Paris to recruit him, because he saw Depp’s screen presence as a way to broaden the film’s appeal beyond young moviegoers naturally drawn to a pirate flick.

“He makes this movie more offbeat,” Bruckheimer says. “He wanted to play Jack Sparrow as half-baked, out at sea too long, drinking too much, but very smart underneath it all. And he’s very visual; he created the look of the character.”

By playing a Disney swashbuckler, Depp hopes to add a summer blockbuster to his long list of smaller films. “It’s up to the public to decide whether to make it commercial,” he says.

And there is another aspect of the movie that pleases Depp: He can show it to his kids. “They should get a kick out of it,” he says.

Johnny Depp has a habit he can’t shake: reading. He reads four or five books at a time; they’re scattered around his house. Depp’s latest finds:

Fierce Invalids Home from Hot Climates by Tom Robbins. The weird adventures of a CIA agent with a taste for sex, drugs, rock ‘n’ roll and the supernatural. “Great. Fantastic. Hilarious.”

Perfume: The Story of a Murderer by Patrick Süskind. The 18th-century tale of a man born with an extraordinary sense of smell. “I’m re-reading it.”