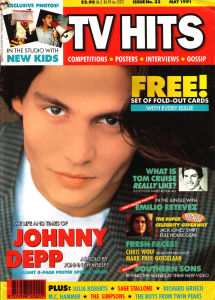 The Good Life
by Edwin J. Bernard
TV Hits
May 1991

Johnny Depp talks exclusively to TV Hits about films, family and fame.
What was your first taste of showbiz?
I started playing the guitar when I was about twelve years old and I started playing clubs when I was about fourteen. I always looked very young, but the club owners would let me play in the bar. I used to go in through the back and play and then I couldn’t be around the booze, until the club owners got to know me and they knew I wouldn’t mess them up. So I basically played clubs. I dropped out of school when I was fifteen and went on the road with bands and played and played and played.
Were you a rebellious teenager?

I don’t think so. When I was a kid I was very curious. I wasn’t malicious or a bad kid, I was just very curious about things, and school at the time didn’t hold it for me because I was too much in love with my guitar. Looking back on it, I was an idiot to drop out, because school was a breeze and all my friends were there. Then I had to deal with real life and paying bills and all that.

What was your family life like?
I have a brother who’s thirty-six, and two sisters, twenty-nine and thirty-four. We got along very well, but my parents split up when I was fifteen. That was a rough time, but we were a pretty close family, all pretty tight.
What did you want the most at fifteen?

What I wanted the most was to play the guitar. Rock’n’roll, like Elvis Costello and The Clash, Squeeze. And then we moved on . . . the last band I was in was called the Rock City Angels. They had a record out and I have a song on it, like Muddy Waters meets the Sex Pistols. Raunchy blues, noises, feedback. I did some singing, but mostly background singing. I never really fancied myself much as a singer. I preferred to stand in the background and just play.

I still play, and it was great doing Cry-Baby because Iggy Pop played my stepfather. Iggy and I got to play together a lot. We’d sit down and come up with a few grooves and just play. Iggy has always been one of my heroes back from the seventies.

Tell me more about your days with the group.
I was the youngest in the band (at seventeen) and we were all pretty young. The others were eighteen, nineteen and early twenties. Did we get any groupies? When you play in a band and you go on the road you get a certain following. That’s part of the appeal—it’s why you start to play the guitar in the first place! We did real well in Florida. We opened for The Pretenders, the B-52s, The Ramones, The Stray Cats, Iggy . . . we exchanged words that night. After the show he was walking around this club with a dog on a leash and someone complimented his dog and he said it’s not a dog. I was kinda drunk and thought that was kinda rude so I started screaming obscenities at him, I don’t know why. Maybe to get some kind of response, because I loved him, I’d always had this immense respect for him. And he walked over to me and looked me square in the eye and said, ‘You little turd’ and walked away. I reminded him of it, and he remembered the club and the gig but not the scene, because he was probably in the same state as me!
So how did the acting career come about?

I was living in LA with the band and I met Nic (actor Nicolas Cage) one night and we became friends and started hanging out. We became very close and he told me that I should be an actor. So I met his agent and he sent me to read for director Wes Craven on A Nightmare on Elm Street. And five hours later I got that phone call.

Acting had never crossed my mind before. I’m not really the most outgoing person in the world. I’m a little bit shy and I never really liked being the center of attention, and I don’t like crowds. Elm Street was sort of a trial by fire. Then I started studying, taking classes and reading books.

Does your acting career mean the end of the music career?
I’d love to keep playing, and I’m still writing. But for now I have to keep it on hold, because people at the record companies would want to make me something that I’m not, they’d want to turn me into some sort of teeny-bopper, ice-cream pushing product. I don’t want to be another actor who sings. And I respect the music too much to put myself in that position. But I still get together and play with people and write and stuff. Right now I’m listening to a load of classical stuff, but my favorite of all time is Tom Waits. I like David Bowie, Siouxsie & The Banshees, Sinead O’Connor. I like a lot of British music. Iggy and U2, they’re like the new Beatles or something.
What was the worst thing about filming Platoon in the jungle?
The conditions were pretty strange in the jungle. Oliver (Stone, the director) explained to us before we left that we needed to live in the jungle for two weeks and learn how to be a soldier. And we did. We lived in the jungle for two weeks and we dug dirt holes and that’s where we slept, and we hiked around for miles with heat exhaustion and humidity and bugs. I didn’t get ill but a few of the guys got the local welcoming! I was very lucky. I don’t think the film would have been anywhere near as good had we not done the training.
Did you enjoy playing a soldier?
I think we’d all wanted to play a soldier from when we were little kids and we all got to play the ultimate soldier. To be able to go to the Philippines and have to live like that. On a much smaller scale we learned what it was like to be in Vietnam. We certainly didn’t have to worry about dying, getting killed, but I learned what it was like to not want to be in the sun anymore, or sweat, or walk. I wanted a McDonald’s so badly it was killing me!
Since Platoon you’ve made less serious movies like Edward Scissorhands and Cry-Baby—do you prefer making those type of movies?
Some of the best experiences of my life were on Cry-Baby. Walking into the John Waters family, that dreamland family and becoming a member of it and feeling that love that they have was incredible. It was like this unconditional love, like being in a commune or something. When John sent me the script he wrote me a letter about what the movie was all about and sent me a tape of Hairspray. John’s movies are so magical, he’s so ahead of everybody.
Looking back on it now, how do you feel about 21 Jump Street?
In the first season I thought they tended to use my character too much and they weren’t using the others enough. It got better but still . . . there’s shows like Hill Street Blues and L.A. Law where they hit all of them equally. I think that it really put some of the things that are going on in the States in schools into perspective; gang violence, sexual abuse, drugs, it gave the viewer a chance to make their own decision. It didn’t point any fingers, it wasn’t preachy. At the end of the show we had a public service announcement. The AIDS show with C. Everett Koop, the US surgeon general, and Dr. Robert Windham, who’s the assistant secretary for health, was good—I liked doing that. AIDS is such an incredible thing . . . the scariest thing about it is the ignorance about it, you don’t know anything about it. I thought it was great to say I don’t know anything about it, these guys do, so listen to them. Emotive subject matter: there’s a lot of things I feel very strongly about. We did some shows on racism, but I don’t think we said all we had to say; racism, gang violence, sexual harassment, discrimination.
How close was Officer Tom Hanson to the real Johnny Depp?
I don’t think Tom Hanson and I were very much alike. There was a bit of me in there. He was much more outgoing, gung-ho and into his job than me.
Everyone knows about your latest tattoo dedicated to Winona, but when did you get your first one?
I had it done when I was seventeen—no, eighteen, because it was something I could keep forever and not regret, because part of my heritage is Cherokee. I just went to this friend of mine who is a tattoo artist. He did it freehand.
How do you feel about being an extremely famous person?
It comes with the territory. It’s part of the job. Your private life gets a little mixed-up and people want to take pictures of you walking down the street with your girl, but it’s something you’ve got to learn to deal with—it ain’t killing me.

3. He was married to actress Lori Anne Allison and has been engaged three times: to actresses Jennifer Grey and Sherilyn Fenn (from Twin Peaks), and presently to Winona Ryder.

4. Johnny has three tattoos: one with his mother’s name, Betty Sue, one with an Indian’s head, in honor of his Cherokee blood, and one bearing the words “Winona Forever”.

5. Johnny has appeared in the TV shows Hotel, Lady Blue and 21 Jump Street, and a telemovie called Slow Burn.

6. He once admitted his idol is Elvis Presley.

9. Johnny has played in a number of groups including Rock City Angels, The Kids, Zaphyre, and The Bad Boys.

10. Winona and Johnny met at a hotel in LA where he stayed on his weekends off from 21 Jump Street.

12. Johnny has exactly the same name as his father, John Christopher Depp.

13. He dropped out of high school at 16 and wasn’t allowed back in.

15. He filmed a nude scene in the movie Private Resort!

17. His favorite sport is karate.

18. The movies he has appeared in so far are: A Nightmare on Elm Street, Private Resort, Platoon, Cry-Baby and Edward Scissorhands.

19. Prior to becoming an actor, Johnny worked as a T-shirt printer and pen salesman among other things.

20. His favorite meal is a burger and chips.