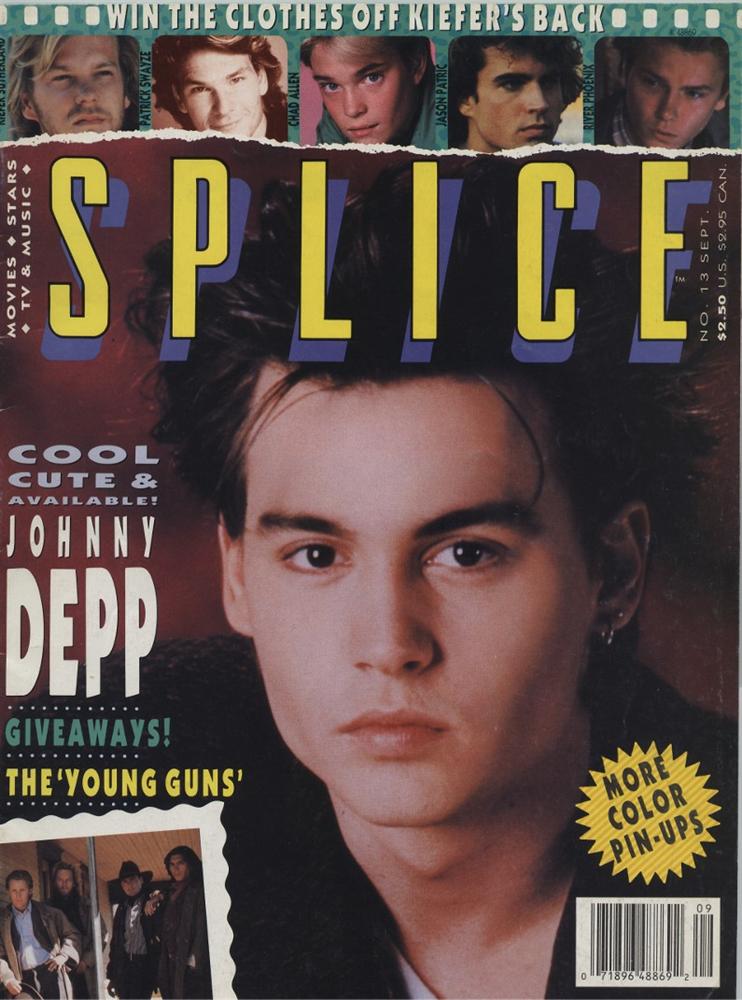 He’s Cool! He’s Cute! He’s Available! The sexy star of 21 Jump Street gets personal in an exclusive SPLICE interview.
Ask any member of the cast or crew of 21 Jump Street and they’ll tell you: The only word to describe Johnny Depp is “cool.” Deborah FeingoldIt seems, in fact, that he is the coolest creature to hit the small screen since “the Fonz” strutted his stuff on Happy Days. Johnny Depp is the King of Cool, the valedictorian of the Cool School, and everybody knows it. Everybody, that is, except Johnny Depp.
The handsome 25-year-old actor—who’s blessed with high chiseled cheekbones, courtesy of his Cherokee heritage—is so unimpressed with his own celebrity status that he denies he is the star of 21 Jump Street. He says his character is the “strong center” of the show. On a recent trip to New York City, Johnny was surprised when he was asked to sit backstage in the Green Room to watch a taping of Late Night with David Letterman, because David doesn’t allow celebrities in the TV audience. And what celebrity worth his weight in dark shades would actually convince his mother and stepfather to move to Vancouver, Canada, so they could be closer to him?

Johnny was born in Owensboro, Kentucky on June 9, 1963. The youngest of four children, he and his family moved to Miramar, Florida, where Johnny did most of his growing up. After experimenting with drugs and petty crime for a short while, Johnny dropped out of high school at the age of 16–a move he now admits was not one of his wisest. He’s now openly opposed to all drugs, and tells his fans so in public service announcements.

While still a teenager, Johnny formed a rock and roll band called The Kids, which had a small but loyal following in Florida. They were impressive enough to open in concert for such heavy hitters as the Talking Heads and The Pretenders. Armed with an electric guitar, Johnny and The Kids headed for Los Angeles, seeking fame, fortune, and a recording contract. Deborah FeingoldUnfortunately, the going was a little tough. The Kids were not reaching musical maturity, and Johnny was forced to accept a job selling ball-point pens over the telephone to make enough money to live and play in L.A.

It was during this period that Johnny got married and divorced. Life was looking grim until a friend of Johnny’s (actor Nicolas Cage, of Moonstruck fame) suggested that he try his hand at acting. Johnny met with Nicolas’ agent, who convinced him to audition for A Nightmare on Elm Street. The rest, as they say, is cinematic history. Johnny landed the lead male role, and decided to focus his ambitions on acting for a while.

We use cookies to ensure that we give you the best experience on our website. If you continue, we’ll assume that you are happy to receive all the cookies on our website.Ok