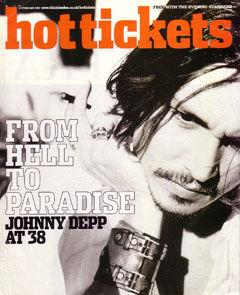 Family life in France means more to Johnny Depp than fame and fortune in Hollywood ever could.

Most seven-year-old boys of my generation were content to spend their free time playing footie in the park, or thinking up new ways to make their Action Men die, but the young Johnny Depp was different. “I was already deep into Dracula and Frankenstein at that stage,” he recalls happily. “Then I stumbled upon the Jack the Ripper case. I saw a documentary narrated by Leonard Nimoy and that’s when my interest in it began.” Now he’s made a movie, From Hell, about London’s most notorious killer, but it’s fitting that Depp’s childhood interests were odd, because his career certainly has been.

Eighteen years after he met a gruesome fate in his debut film, A Nightmare on Elm Street, Depp is still resisting any attempts to turn him into the bona fide movie star that his looks and talent suggest he should be. In fact, some of his choices have been so uncommercial and contrary that it’s a surprise to some that he’s still working at all. “I think the idea of a movie star is a frightening notion. That’s a heavy load and a tremendous responsibility and I definitely don’t consider myself that,” says Depp in his slow and deliberate way. “I consider myself an actor, or at least someone who’s trying to be an actor, and I’ve had a lot of luck. But I think that to be labeled a movie star, or to buy into that label, gets in the way of being an actor and I think it’s dangerous for an actor.”

So paranoid is he about stardom that he’s taken the concept of dressing down to almost ludicrous extremes. When I meet him in a Beverly Hills hotel room, he’s wearing a scruffy sweater and trousers, as well as an absurdly crumpled and stained tan hat. With a roll-up dangling from his lower lip, the look is Steptoe and Son chic but he can’t disguise those super-sharp cheekbones and he still turns heads when he walks through the lobby. For all that though, the 38-year-old Depp is good company. He thinks before he speaks, has a nice, dry sense of humour, and, despite a history of run-ins with the paparazzi and a famous 1994 incident when he trashed a New York hotel room, he is not at all precious. “I don’t think I was ever a moody brat,” reflects Depp. “I think I was just confused and upset more than anything. And I was taking everything so seriously, to the degree that I felt like this novelty and I didn’t want to be a novelty and I didn’t want to be a product.”

From Hell certainly isn’t an example of the sort of film-making by the numbers that he rails against. Based on Alan Moore’s acclaimed graphic novel, it’s a vivid, dark and complex account of the events of the autumn of 1888, when five Whitechapel prostitutes were brutally carved up by an unknown murderer. Filmed outside Prague, where the East End was reconstructed in a field, it points the finger of blame firmly at the British Establishment, with the Royal Family and the Freemasons playing prominent parts. “We’re weaving fact and fiction,” concedes Depp, who plays Inspector Abberline, the detective in charge of the Ripper investigation. Does he think that the Royal Family will be queueing up for tickets? “I have a sneaking suspicion they won’t be,” he grins, “but maybe I’ll be surprised.”

Having already demonstrated his English accent in 1999’s Sleepy Hollow, he gets another chance here and if it’s a little too contemporary for a 19th-century London copper, then it’s still a very creditable effort. “I’ve spent a lot of time in England and in my own way I’ve studied the accents,” he offers. “The real Abberline was actually from Dorset and you know what that accent’s like. If I’d done that all the reviews would have been, ‘What a terrible English accent Johnny Depp has done.’ Then I thought of Manchester, because that’s working-class, but there’s the danger of sounding like the guys in Oasis, so I went cockney.” Typically, Depp plays Abberline as a tormented man who has visions of the crimes and who spends his off-duty hours in the local opium den. “I wanted to do the opium stuff because I’d read accounts of police officers who, because of the nature of their work, admitted to being alcoholics, or couldn’t function without drugs. I thought it would be interesting to make Abberline a little more human by doing that and by using the drugs of the time.”

Born in Kentucky and brought up in Florida, Depp moved to L.A. as the guitarist in a rock band, and early on he spent a lot of time actively exploring his dark side. After his early success as an actor he frequently appeared in the tabloids following incidents such as the one involving a trashed hotel room—and disputes with photographers. “Yeah, there was a period of my life when I’d gone pretty far and I never want to go back there again,” he claims. “It wasn’t like I was living this horribly negative existence, but maybe I was on the verge of sticking my foot into existentialism. You know, the light hadn’t been turned on.”

It took the birth of his daughter to switch it on. Having previously been engaged to Winona Ryder and then involved with Kate Moss for a number of years, Depp met French bubblegum singer Vanessa Paradis in 1998 and she gave birth to Lily-Rose Melody in 1999. “It was the moment I was given the gift of amazing clarity,” babbles the doting dad. “You’re looking into the eyes of your reason to live and that’s a pretty profound moment in your life.”

They live just outside of Paris, which is why Depp’s accent now has a distinctly Gallic tinge. “They’ve been really welcoming to me and it’s given me the opportunity to have the beautiful, amazing family life that I have now, so I’ll definitely stay in France,” he says. As he’s only been in a few box office hits, Edward Scissorhands, Donnie Brasco and Sleepy Hollow, it can hardly hurt his career and he still owns Bela Lugosi’s old house for when he’s in L.A. He seems genuine about living the quiet life and these days is rarely seen at the Viper Room—the L.A. nightclub he co-owns—outside which, in 1993 after a night out on the town, fellow Hollywood Bratpacker River Phoenix died of a drug overdose. “I’m too old to go out,” says Depp. “You know, that whole thing of wasting so many years getting myself drunk enough to have conversations with people that were just useless and pointless, I’m just not interested in doing that anymore. I like going to sleep and waking up early.”