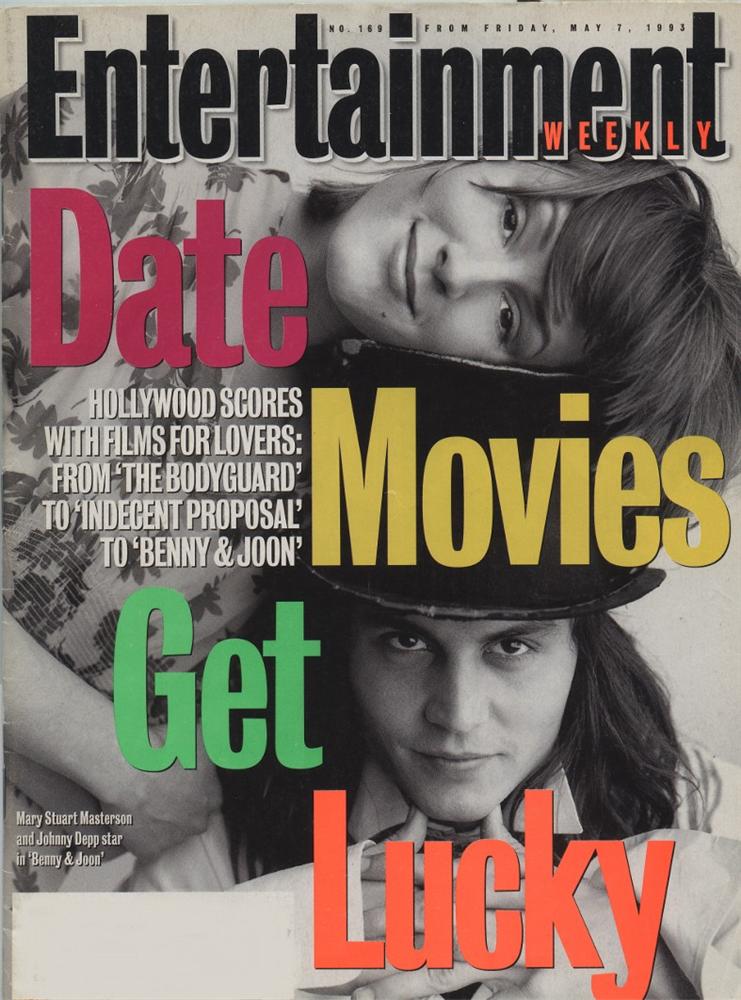 Entertainment Weekly
May 7, 1993
by Ryan Murphy
Photographs by Bruce Weber

Mary Stuart Masterson has experienced love in the movies. But love at the movies . . . now that’s a very different story. On her first date, at a showing of Aliens, she barely watched the screen. “I wasn’t feeling well,” the 26-year-old actress says, blushing. “I spent an hour and a half throwing up in the bathroom.”

For Johnny Depp, the topic of romantic movie dates summons equally bittersweet memories. “When I was a teenager,” remembers the 29-year-old heart stopper of Edward Scissorhands and Cry-Baby, “I went to see Star Wars at a drive-in in Florida. I was all excited.” But instead of getting smitten, Depp and his date just got bitten, by mosquitoes. “It was so bad that I ran to the snack bar and got this mosquito repellent, but all it did was make us stink. It was a total disaster.”

“Actually,” Depp adds, his eyes narrowing into slits, “I’ve never heard of this phrase date movie. Is this a new phenomenon?”

New? No. Rekindled? Yes. After a decade dominated by action films, the sleeper success of Benny & Joon—an oddball romance starring Masterson and Depp as seemingly ill matched lovers who find each other a perfect fit—is the latest evidence that movies made for couples are finding their niche once again. In its first weeks, the film has launched a flurry of hand–holding in the dark, despite its commercially improbable story: Masterson plays Joon, a schizophrenic cared for by her big brother, Benny (Aidan Quinn). Enter Depp’s Sam, a dyslexic charmer obsessed with silent comedies. Boy meets girl. Boy loses girl. Boy visits girl in institution and wins her back.

Masterson agrees. “It’s stupid that people think of movies like Benny & Joon as surprising when they do well,” she says. “They are basic stories about the most fundamental human needs. And the fact that those are considered risks, and the RoboCop movies mitigate those risks—well, it’s backward. Movies like Benny & Joon are universal.”

Even so, the film was nearly derailed before shooting began. Originally Laura Dern and Woody Harrelson were attached to the project. But then Dern passed and Harrelson, who had committed to play Benny, jumped into Paramount’s Indecent Proposal. Furious, MFM slapped Harrelson and Paramount with a lawsuit (since it settled out of court), and the movies fate hung by a thread.

“Laura Dern is great,” says Depp. “And Woody Harrelson . . . well, I’ve never seen anything he’s done, but I’m sure he’s very good. But Aidan is my idea of the perfect man. And Mary Stuart, she has knowledge way beyond her years.”

Like many of his roles, Depp’s Sam is a misunderstood antihero, a type he gravitates toward because “somebody who is different, who is judged on appearance instead of heart, who is looked upon as a freak—well, all I can say is, freaks are my heroes.” Nonetheless, “after playing Sam, I figure we’ve pretty much covered the innocent-lonely-guy sort of thing. I’m trying to go elsewhere.” That he may do in Tim Burton’s Ed Wood, a black comedy in which Depp is set to play the ‘50s transvestite filmmaker Edward D. Wood Jr. (Plan 9 From Outer Space), who is considered the worst director in movie history. In the film, due for production at Disney this summer, Depp gets to pet pink angora sweaters and dress up in women’s clothing. He can hardly wait.

Masterson, whose roles in Some Kind of Wonderful and Fried Green Tomatoes gave her ample experience with eccentric characters (“I get a lot of ‘I’m a misfit too!’ fan letters”), had to walk a finer line when playing Joon.

“Every time you see something about mental illness in movies,” she says, “it’s always this descent into madness, or people are labeled as special, like, ‘What we’re actually trying to say is, this person is fucked up.’ In preparing for Joon, I discovered that it’s not gloom and doom all the time. But I was very scared of coming off as flip.”

For all its difficulties, Masterson considers the role “a gift.” Usually, the actress says, she’s “like the twelfth girl on the list. If the part’s a tomboy, she swears, I might get it. Or if it’s written for Jodie [Foster], I might have a shot after the other two in front of me pass.”

Because there aren’t enough good parts to go around, Masterson has written her own. In Around the Block, an independent production she’ll also direct this fall, she plays a woman who conquers her fears by becoming a singer. “It’s a romantic comedy too,” she says proudly. “Who knows? Maybe it will become a big date movie. If I’m lucky.”