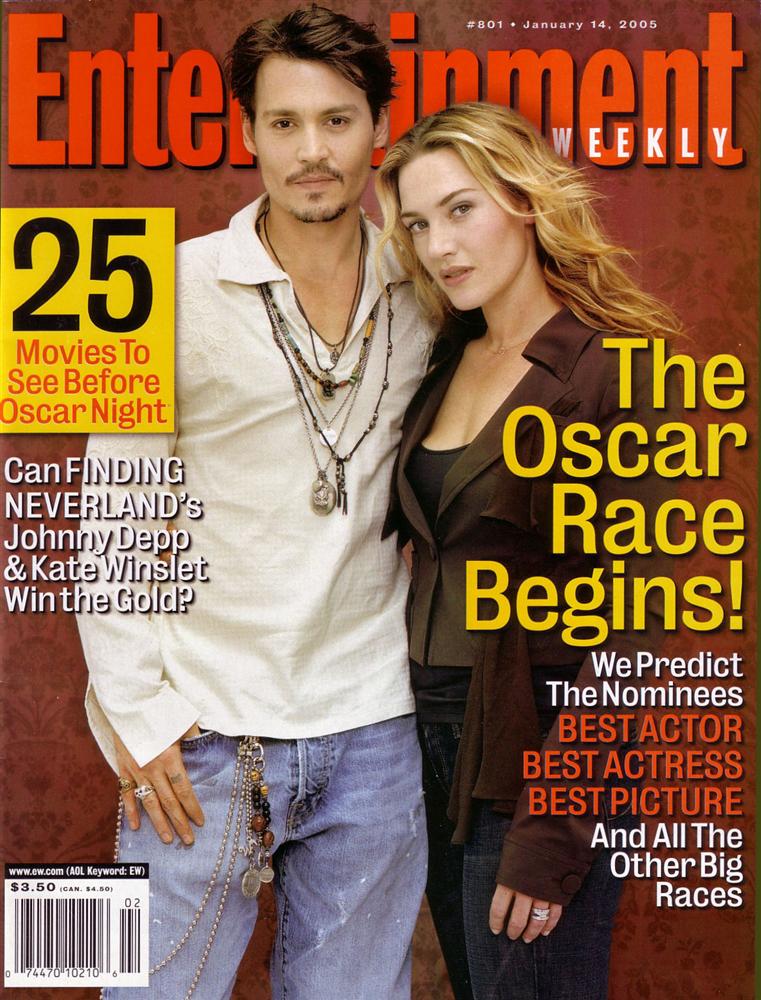 If anyone out there has Johnny Depp’s address, please send him a DVD of Eternal Sunshine of the Spotless Mind. Though he clearly adores his Finding Neverland co-star Kate Winslet, he’s never seen the other movie that may earn her an Oscar nomination this year.

“I’m going to see it for Kate,” he promises.

“You’re so full of s—, I love it!” says Winslet, sitting nearby.

“Film is the greatest tranquilizer in the world for me,” he explains. “I fall asleep during opening credits. I go right out. Any film. Cartoons, I’m up for days. Movies, it’s over with in seconds.”

Depp should hope the rest of the Academy doesn’t get so sleepy. Just one year after scoring his first-ever Oscar nomination for Pirates of the Caribbean, Depp could find himself in the Best Actor race again thanks to his whimsical performance as Peter Pan playwright J. M. Barrie in Neverland. In the emotionally affecting drama (loosely based on true events), Barrie develops a friendship with ailing widow Sylvia Llewelyn Davies (played stoically by three-time nominee Winslet) and her four young sons, one of whom, named Peter, inspires Barrie’s most famous work. So far, the movie has won Best Film honors from the National Board of Review, as well as five Golden Globe nominations—one for each hankie it requires.

At the heart of Neverland is the innocent yet scandalous relationship between Winslet and Depp, who weren’t an obvious screen pairing—which is precisely why director Marc Forster chose them. “Kate has a real earthiness to her, a strength of will power,” says Forster, who guided Halle Berry toward her Oscar for Monster’s Ball. “Johnny has this very creative spirit, out there and floating and everything. So the two of them juxtaposed I think makes an interesting match.”

On a wet and windy Friday afternoon in Paris (the halfway point between Winslet’s home two hours outside London and Depp’s villa in the south of France), the pair rolled their own cigarettes (one thing they do have in common) and chatted about the movie they wrapped two and a half years ago.

ENTERTAINMENT WEEKLY: Most people don’t realize you filmed Finding Neverland before Pirates of the Caribbean and Eternal Sunshine. How do you talk about something you made so long ago?

JOHNNY DEPP: You lie. You make stuff up.

KATE WINSLET: I’ve had another baby since then, so I’ve lost brain cells. So I had to go and watch the movie several times, just to have an understanding of what the whole thing was really like.

Did you ever get impatient and want it to just come out already?

Depp: I knew there had been some weirdness because of the Peter Pan movie (Universal’s 2003 fantasy, which contractually had to be released before Miramax’s Neverland). It started to feel like it was shelved or something, you know what I mean?

Winslet: Also, as actors, you never get told anything, really. They just call you up when they need to roll you out on a few red carpets.

The movie has so many traditional tearjerker elements: fatherless children, fatal illness, the transporting power of art. What efforts did you make to temper that so it didn’t go over the top?

Depp: We used to have these little sessions—Kate, myself, and Marc—where we’d go through the thing and locate the potential problem areas.

Winslet: Locate the smush. Sometimes we would just re-jig things a tiny bit, shave off a few edges, shortening lines here and there that perhaps made too much of a moment that could be said more simply by just seeing two people in a frame together.

So there’s not an example of an entire scene that was taken out?

Winslet: There was a scene that was taken out, actually. There’s a scene when we first arrive at the cottage in the country, and we’re sitting out side drinking tea and Johnny’s smoking a pipe . . .

Depp: I was getting ready to vomit from that pipe.

Winslet: There’s a line that I say to Johnny, something along the lines of, “Sometimes I wonder if you realize how much you’ve come to mean to us all.” And he says, “Well, the boys are young.” And I say, “Yes, but for me.” If that scene had been kept in, the suggestion of something more intimate between them would have been much, much bigger. I love the fact that in the film, there’s never the clinch or the kiss or the moment.

The movie indicates that Barrie and Sylvia’s friendship was quite the scandal in 1903. How do you think today’s society would react to such a relationship?

Depp: Oh, Jesus Christ, we live in the era of reality shows and people are going to the toilet and millions of viewers watching. No, I don’t think it would be a shock.

Winslet: I saw a show last night called Greatest Embarrassing TV Moments. And I’m sorry, I’m a sucker for all that stuff. So I’m sitting there and there was this guy on this show called Celebrity Detox. One thing they had to do was their own colonics. And then they had to push it through a sieve. This guy showed the world his poo. So I don’t know if it would be that shocking, necessarily.

I noticed that Barrie very rarely touches or hugs the boys. Some people accused him of having inappropriate relationships with them. Did you make a conscious decision to limit your physical contact with them to avoid such talk today?

Depp: That whole thing, I thought it was such a load of hearsay, like a nasty rumor that had been around since then. I don’t buy into that. I thought it would be really wrong to give any weight to that at all. Of course it had to be mentioned, it had to be dealt with.

In one of Neverland’s few negative reviews, The New York Times critic said she didn’t think you were “pushed to [your] limits” in this movie.

Maybe it’s because you weren’t running down the streets naked and screaming.

Depp: I do that on weekends.

Winslet: Every character is different.

Depp: You do what is called for.

Winslet: Perhaps she was picking up on the fact that Marc was trying to get something that was quite subtle. His general feeling was: Let’s not act it up here just because we’re all doing a period film. I mean, Barrie’s not Edward Scissorhands.

In the first scene, we see that Barrie gets intensely nervous before his play begins. Have either of you suffered from stage fright?

Winslet: Most recently, can I just mention f—ing Saturday Night Live? Oh my God, it was so terrifying. They made me tap-dance, so if I missed a beat, that was it. Live, moment gone.

Depp: My biggest stage-fright moment is anything where you have to go and talk in front of people. Doing the work on set, that’s fine. But an appearance, anything where there are a lot of people, especially if you have to say something. Even just standing there I feel like an idiot.

Barrie’s wife in the film doesn’t understand or appreciate his creative side. Both of you, on the other hand, are involved with artistic people (Depp lives with pop singer Vanessa Paradis; Winslet is married to director Sam Mendes]. Do you think that’s important?

Depp: Probably, on some level. For me, regardless of what your partner does for a living, whether they’re a singer or a director or a plumber, what’s important is that they have a passion for what they do. Vanessa and I never talk about our work.

Winslet: It turns out that it is important, yeah, but I didn’t set out to find somebody who was involved in the same world as we are. It just increases the level of understanding that you can have with the person that you love. There’s nothing about what I do that I’ve ever had to explain to Sam because what he does for a living is understand actors.

Barrie sees flashes of himself in Peter. Do you ever see yourself in your kids?

Depp: Every day. My daughter, who’s five-and-a-half, already she’s an unbelievable mimic. It’s astounding. This guy we were working with, a Scottish guy, she started imitating him perfectly. My [two-year-old] son, Jack, he’s always getting into stuff. He’s like a little pirate. I was on the phone with my sister the other day, saying “Was I this nuts when I was little?” “Yeah, you were.”

Winslet: My daughter cam running up to me the other day and said [dramatically], “Mom, I have to tell you something. Just promise me one thing. When I’m a big girl, Mom, let me be in a movie! I know I can do it!” Beating her fists against my thigh.

And she’s how old?

Winslet: Four. And the really scary bit: I sat her on the kitchen counter and I said, “I know you can do it, too. You’re going to be great.” And she said, “Yeah, I know.” I phoned my dad and said, “Tell me I wasn’t like this when I was four.” He said, “I hate to break it to you—you were like that when you were three.”

Freddie Highmore was only nine years old when he started filming his role as the emotionally traumatized Peter Llewelyn Davies in Finding Neverland. So how on earth did he come up with his astonishingly powerful performance? “Well, you just sort of think about what the character’s thinking,” he says, “and then you’re in the character.”

Kids. They make it all seem so easy.

Exhibiting a vulnerability and focus unlike any child actor since Haley Joel Osment in The Sixth Sense, Highmore provides an unforgettable portrait of an introverted young boy drawn further inward by the death of his father and the worsening illness of his mother. “When there were scenes with Freddie,” says Depp, “Kate and I just stood back and let him go. It’s unbelievably compelling.” Seconds Winslet: “He has the most terrifying instincts, they’re just bang-on. And he has no idea that he has that.”

Neither did his co-stars at first. So director Marc Forster decided to schedule one of Highmore’s toughest scenes—where he tears up a book and demolishes a

playhouse—on his second day of filming. “I did that on purpose because I felt when Kate and Johnny observe that child act, it will change their attitude towards working with him,” Forster explains. “I have never witnessed anything like it.”

Highmore, who is now twelve, remembers that day a bit differently. “Smashing up the playhouse, that was really great,” says the actor, a rabid soccer fan whose mother is a talent agent in London (representing the likes of Imelda Staunton). “Sometimes they’d say, ‘Oh, sorry, there was a problem with the sound or the lights. And I’d say, ‘Yes! I get to smash it again!”

Depp and Winslet were so impressed with Highmore that they each recommended him for the title role in Tim Burton’s forthcoming update of Charlie and the Chocolate Factory, also starring Depp. So Highmore, who insists he’s nowhere near as moody as Peter, did find something in common with Charlie. “When I left the set of Finding Neverland, I was quite upset, because I thought I wouldn’t see Johnny again,” he says. “And Charlie wants to go back to the chocolate factory. We both got our wishes.”