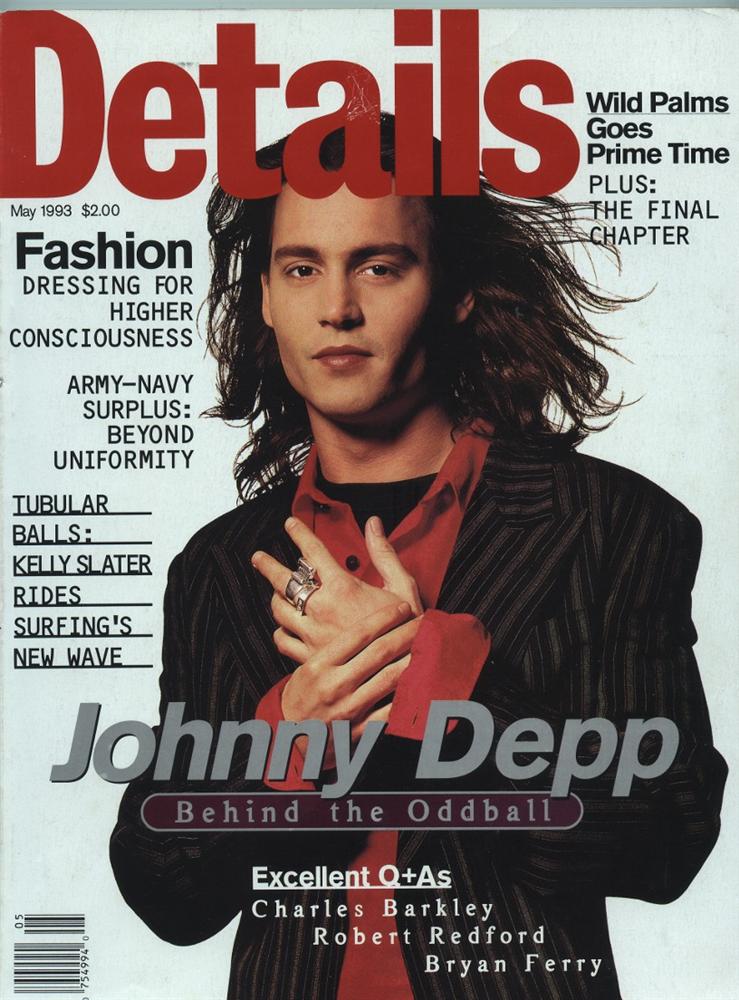 Details
May 1993
by Chris Heath
Photographs by Albert Watson

Folkert arranges to meet Johnny in five minutes outside the hotel, and leaves.

Johnny Depp says he always had an idea he was going to be something different. Not a movie star—”in Florida that just didn’t exist.” But guitar heroes did. There was one at his high school, a guy named John Rock. “You couldn’t get a cooler name in the ’70s than that.” So Johnny decided to become a famous guitar player. For the girls. And to make a place in his world. “You’ve got to have some kind of identity,” he says. “We weren’t jocks, we weren’t rednecks—we were probably considered burnouts, although we weren’t fully burnouts. So we decided to be rock stars instead.”

Good thing, too. Johnny was going nowhere in high school. He had no credits for anything much. He would skip a lot. One day, late, walking down the hall with a friend, the two simply looked at each other and knew. They turned around, walked out.

A few weeks later Johnny Depp changed his mind. He went to see the administration and said he wanted to come back. They didn’t think it was a good idea. So Johnny worked for awhile printing T-shirts, then at a garage, first pumping gas then aligning wheels and stuff. It was around this time he read Catcher in the Rye and On the Road, with the usual consequences.

And he played in the band. They had all sorts of names. Flame. Bad Boys (he’s fairly embarrassed by this one). Bitch (he’s very embarrassed about this one). They settled on the Kids, and were soon supporting name bands from out of town. Iggy Pop. The Pretenders. The Ramones. Chuck Berry. A Flock of Seagulls. A Flock of Seagulls! Johnny couldn’t believe it, but that guy really had that flammable hair.
Johnny Depp has a morning of German TV interviews. He tells me he hates doing this stuff and insists he’s not very good at it . But I watch, and he’s not so bad. He graces them with an effective spaced-out, “Wow! Yeah?” demeanor, but it’s cleverly managed. Each interviewer asks him about his dreams, and each time he considers the question as though he truly has never thought about this before. It is a long morning . . .
Interview Number One. He interrupts a dull question to say, “Wow! Those are great socks!” At the end they ask him to do something silly with a microphone that has a big red foam bubble with their station’s name. “I don’t know what to do,” he demurs. “I’m awful at that kind of thing. I can’t do promos. I’m not a good salesman. Even for myself.”
Interview Number Two. They set up their cameras then ask him to wear a baseball cap festooned with their logo. He asks them how to say “I need a monkey” in German. They insist there is no way to say that. “What if you do need a monkey in Germany?” he asks with concern. Then he gets to work. He tells them his missing talent is speech: “I’m not a good talker. Someone else’s sentences, that’s O.K. It’s my own that are difficult.” He tells them his favorite actors are Robert Mitchum, Robert De Niro, Alan Arkin, Marlon Brando, and Buster Keaton. He tells them about his next film, the Tim Burton-directed story of C-movie director and noted cross-dresser Ed Wood. “Who?” the interviewer asks. “Ed Wood,” he repeats. A flash of recognition. “Edward Scissorhands!” proclaims the interviewer triumphantly. “No,” he deadpans, “I’ve already done that one.” The final question is whether he is a vegetarian. “No,” he says. “I rip meat apart with my hands, raw.” There is a pause. “Are you?” he inquires. “Yes,” says the interviewer.
Interview Number Three. A print journalist starts out earnest and conceptual. Johnny obliges: “The art of being fake, it’s kind of an obtuse job . . . I’ve had all the obvious labels—the bad boy, the teen idol, James Dean—and I do anything to fight them . . .” Then the interviewer gets nosy. Is Johnny still with Winona Ryder? “Yeah.” She gave you a star in the sky? “Yeah.” What is its name? “I don’t want to go into it,” he says. Has he seen Dracula? “No.” The photographer asks him to bare his tattoos, but he refuses. “I don’t want to pose. You need a beefcake guy for that. I’m not a lumberjack type.”
Interview Number Four. The interviewer has brought an interpreter. “Her sister is twelve,” explains the interpreter, “and she’s all excited about you.” “I’m all excited about her, says Johnny. “What?” snaps the interpreter. “Just a joke,” he smiles painfully. He tells Interviewer Number Four that he hates watching his own films. “Arizona Dream was the first time I watched myself where I didn’t feel sick.” He chats about the self-financed short film he directed then pulled after one showing. “I went for a cheese effect,” he explains, “but I didn’t have any specific cheese in mind. It came out sharp cheddar.” He considers for a moment. “Or Jarlsberg.”
As he finishes up, I grab a word with the disheveled, unshaven Kusturica, who speaks halting English in a manic tone. He said he knew Depp had something when he heard him play guitar. “That is more important than how good an actor he is. Acting, who cares? Everyone could be an actor.” He tells me how rich Johnny is spiritually and that “he has a certain self-destructive side which I like very much.” His most intriguing comment is this: “He’s one of the great young actors, in that he has a rich mythological eruptive internal life. In America I stopped seeing people with secrets. They just become part of the CNN global system. He has secrets, and secrets are the main sign of human existence. It’s beautiful to have a guy who was not eaten by TV civilization, who is still human in its shadow.”

It’s over. The Germans in the anteroom tell him that a man in a strange flag-festooned leather jacket had been trying to find him, but has gone. Johnny picks up his backpack and Butthole Surfers tape in his room and leaves for the airport. We arrange to meet in New York in a few days. “Call me at the hotel,” he says. “Mr. Stench.”

When Johnny Depp told his parents that he was going to be a rock star, “they thought I was nuts.” But they had greater worries than this flight of fancy. Their youngest child seemed . . . strange. For a while they even considered professional help. “I used to make weird noises,” Johnny explains. “And I used to do everything twice.”
DETAILS: Like what?
JD: If you shut off a light, shut it off twice.
Well, that means it’s back on.